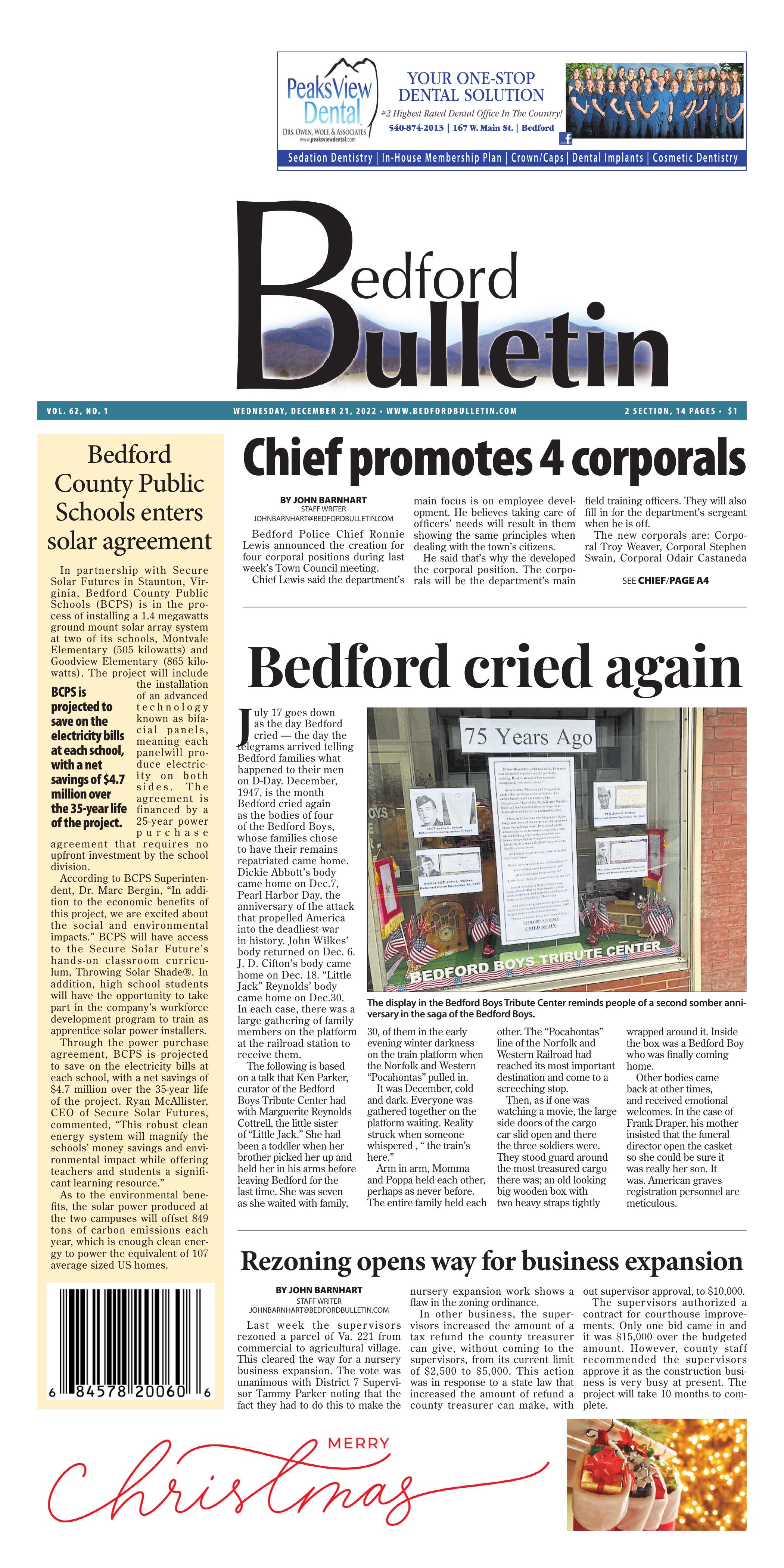 Chief Lewis said the department’s main focus is on employee development. He believes taking care of officers’ needs will result in them showing the same principles when dealing with the town’s citizens.

Chief Lewis also said the position of community resource officer has been created. He will focus on the community’s needs and development. He will also be the department’s public information officer and recruitment officer. Ryan Dolan was named to this position.

In business, Council approved rooftop solar panels on a house on Mcghee Street. They also approved a $30 car tax rebate to each account. This will be per account, not per car. Finally Council approved a $220,000 contribution to the Bedford Regional Water Authority for a project in Bedford.

All of these actions were unanimous.

July 17 goes down as the day Bedford cried — the day the telegrams arrived telling Bedford families what happened to their men on D-Day. December, 1947, is the month Bedford cried again as the bodies of four of the Bedford Boys, whose families chose to have their remains repatriated came home. Dickie Abbott’s body came home on Dec.7, Pearl Harbor Day, the anniversary of the attack that propelled America into the deadliest war in history. John Wilkes’ body returned on Dec. 6. J. D. Cifton’s body came home on Dec. 18. “Little Jack” Reynolds’ body came home on Dec.30. In each case, there was a large gathering of family members on the platform at the railroad station to receive them.

The following is based on a talk that Ken Parker, curator of the Bedford Boys Tribute Center had with Marguerite Reynolds Cottrell, the little sister of “Little Jack.” She had been a toddler when her brother picked her up and held her in his arms before leaving Bedford for the last time. She was seven as she waited with family, 30, of them in the early evening winter darkness on the train platform when the Norfolk and Western “Pocahontas” pulled in.

It was December, cold and dark. Everyone was gathered together on the platform waiting. Reality struck when someone whispered , “ the train’s here.”

Arm in arm, Momma and Poppa held each other, perhaps as never before. The entire family held each other. The “Pocahontas” line of the Norfolk and Western Railroad had reached its most important destination and come to a screeching stop.

Then, as if one was watching a movie, the large side doors of the cargo car slid open and there the three soldiers were. They stood guard around the most treasured cargo there was; an old looking big wooden box with two heavy straps tightly wrapped around it. Inside the box was a Bedford Boy who was finally coming home.

Other bodies came back at other times, and received emotional welcomes. In the case of Frank Draper, his mother insisted that the funeral director open the casket so she could be sure it was really her son. It was. American graves registration personnel are meticulous.

Last week the supervisors rezoned a parcel of Va. 221 from commercial to agricultural village. This cleared the way for a nursery business expansion. The vote was unanimous with District 7 Supervisor Tammy Parker noting that the fact they had to do this to make the nursery expansion work shows a flaw in the zoning ordinance.

The supervisors authorized a contract for courthouse improvements. Only one bid came in and it was $15,000 over the budgeted amount. However, county staff recommended the supervisors approve it as the construction business is very busy at present. The project will take 10 months to complete.

In partnership with Secure Solar Futures in Staunton, Virginia, Bedford County Public Schools (BCPS) is in the process of installing a 1.4 megawatts ground mount solar array system at two of its schools, Montvale Elementary (505 kilowatts) and Goodview Elementary (865 kilowatts). The project will include the installation of an advanced technology known as bifacial panels, meaning each panelwill produce electricity on both sides. The agreement is financed by a 25-year power purchase agreement that requires no upfront investment by the school division.

According to BCPS Superintendent, Dr. Marc Bergin, “In addition to the economic benefits of this project, we are excited about the social and environmental impacts.” BCPS will have access to the Secure Solar Future’s hands-on classroom curriculum, Throwing Solar Shade®. In addition, high school students will have the opportunity to take part in the company’s workforce development program to train as apprentice solar power installers.

Through the power purchase agreement, BCPS is projected to save on the electricity bills at each school, with a net savings of $4.7 million over the 35-year life of the project. Ryan McAllister, CEO of Secure Solar Futures, commented, “This robust clean energy system will magnify the schools’ money savings and environmental impact while offering teachers and students a significant learning resource.”

As to the environmental benefits, the solar power produced at the two campuses will offset 849 tons of carbon emissions each year, which is enough clean energy to power the equivalent of 107 average sized US homes.