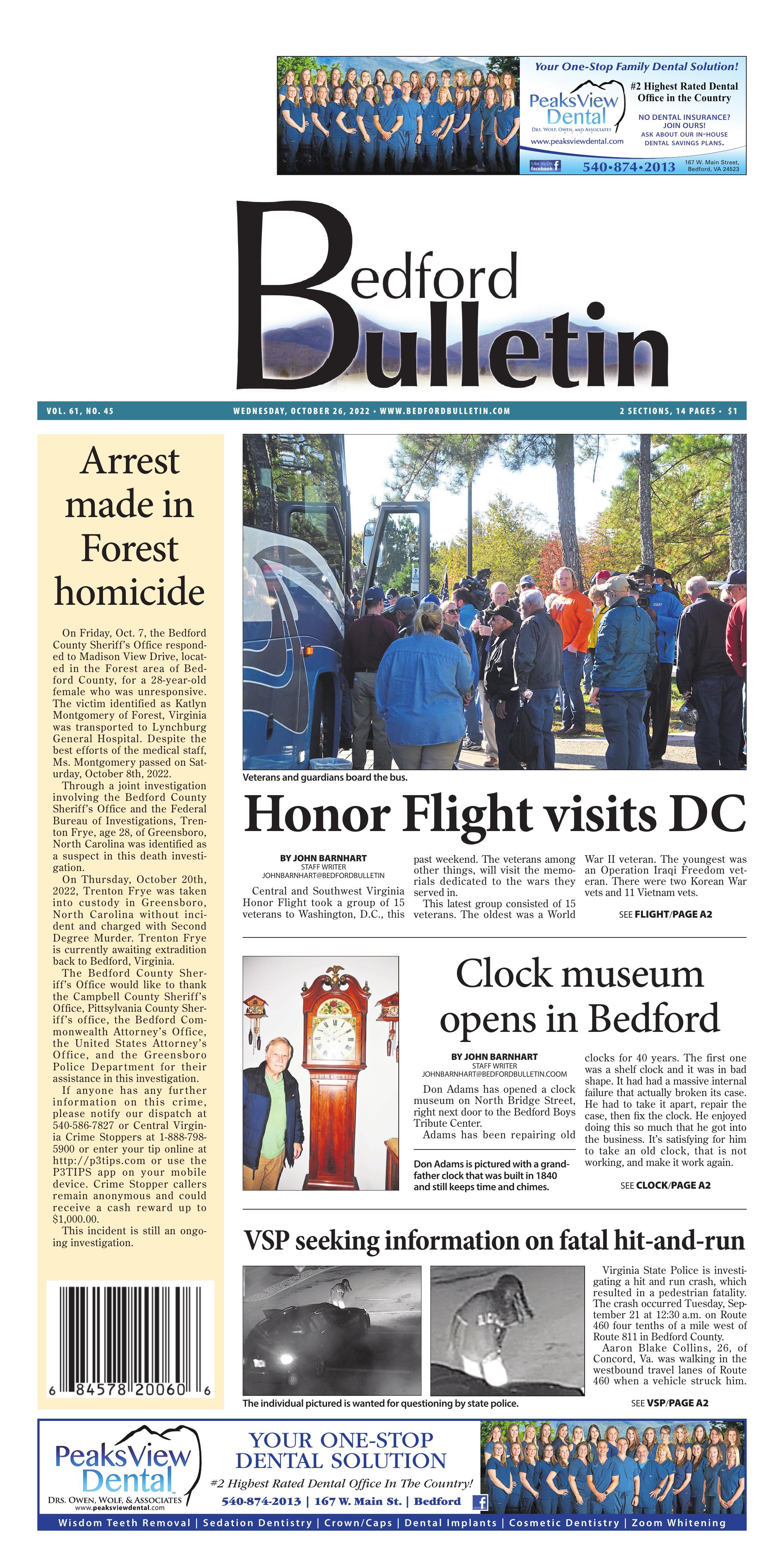 Veterans and guardians board the bus.

Women from the DAR wave flags as the bus full of veterans drives by.

Jerry De Graff, one of the veterans, is pictured.

Veterans and their guardians stand for the presentation of the colors.

Jack Johnson was one of the 11 Vietnam veterans on the trip.

Central and Southwest Virginia Honor Flight took a group of 15 veterans to Washington, D.C., this past weekend. The veterans among other things, will visit the memorials dedicated to the wars they served in.

This latest group consisted of 15 veterans. The oldest was a World War II veteran. The youngest was an Operation Iraqi Freedom veteran. There were two Korean War vets and 11 Vietnam vets.

Although some groups in other parts of the country actually fly, this group is close and goes up by bus. They mustered at the National D-Day Memorial and after a breakfast prepared by three DAR chapters the boarded the bus and headed out.

“The DAR ladies have been wonderful,” Martin Leamy commented. Leamy, an Army veteran heads up the local Honor Flight group.

The DAR ladies were from the Peaks of Otter, Blue Ridge and Col. William Preston chapters.

A guardian was assigned to each veteran and helped with any needs the veteran had. Younger veterans tend not to have needs. Many elderly veterans may have mobility issues and need help.

Bedford’s JROTC was on hand, with a color guard, to see them off. The Virginia state police was there with a force of motorcycle troopers who provided a police escort for the bus.

Jack Johnson was one of the Vietnam vets who made the majority of the Honor Flight veterans. He was drafted in 1971 and was in Vietnam from late 1971 and 1972. He was in the 71st Cavalry, which was a helicopter outfit. The helicopters were scouts, Hueys and attack type helos.

“I worked in the motor pool,” he said.

“I drove the old man around,” Johnson said, describing one of his duties. The old man was the unit commander.

They received attacks with rockets and mortars. The Communists were after the helicopters, but they had sand bag walls around the helos to protect them.

The individual pictured is wanted for questioning by state police.

Virginia State Police is investigating a hit and run crash, which resulted in a pedestrian fatality. The crash occurred Tuesday, September 21 at 12:30 a.m. on Route 460 four tenths of a mile west of Route 811 in Bedford County.

Aaron Blake Collins, 26, of Concord, Va. was walking in the westbound travel lanes of Route 460 when a vehicle struck him. Mr. Collins died at the scene.

Virginia State Police is seeking information in this crash. Description of the vehicle is a 2004-2007 BMW Series Wagon, with damage to driver side front bumper, possibly driven by a black male with longer than shoulder-length hair, with a slender build.

If you have any information about this individual please contact the Virginia State Police, Bedford Field Office, at 540-586-7905, or questions@vsp.virginia.gov.

The crash remains under investigation.

On Friday, Oct. 7, the Bedford County Sheriff’s Office responded to Madison View Drive, located in the Forest area of Bedford County, for a 28-year-old female who was unresponsive. The victim identified as Katlyn Montgomery of Forest, Virginia was transported to Lynchburg General Hospital. Despite the best efforts of the medical staff, Ms. Montgomery passed on Saturday, October 8th, 2022.

Through a joint investigation involving the Bedford County Sheriff’s Office and the Federal Bureau of Investigations, Trenton Frye, age 28, of Greensboro, North Carolina was identified as a suspect in this death investigation.

On Thursday, October 20th, 2022, Trenton Frye was taken into custody in Greensboro, North Carolina without incident and charged with Second Degree Murder. Trenton Frye is currently awaiting extradition back to Bedford, Virginia.

If anyone has any further information on this crime, please notify our dispatch at 540-586-7827 or Central Virginia Crime Stoppers at 1-888-798-5900 or enter your tip online at http://p3tips.com or use the P3TIPS app on your mobile device. Crime Stopper callers remain anonymous and could receive a cash reward up to $1,000.00.

This incident is still an ongoing investigation.

Don Adams is pictured with a grandfather clock that was built in 1840 and still keeps time and chimes.

Don Adams has opened a clock museum on North Bridge Street, right next door to the Bedford Boys Tribute Center.

Adams has been repairing old clocks for 40 years. The first one was a shelf clock and it was in bad shape. It had had a massive internal failure that actually broken its case. He had to take it apart, repair the case, then fix the clock. He enjoyed doing this so much that he got into the business. It’s satisfying for him to take an old clock, that is not working, and make it work again.

He has an extensive clock collection and all the clocks in the museum are his. He hopes later to get other collectors to loan clocks to the museum for display to allow the displays to be rotated monthly. The museum has extensive security with lots of cameras. You don’t see them, but they are there. A few even allow him to speak to an intruder: “I see you and the police are coming.”

There are a number of clocks. There is a grandfather clock, made in 1840, that keeps time and has a very pleasant chime on the hour. He also has a double wind clock, which he said is rare. It has two mechanisms.

“When you wind both of them, it lasts longer,” he said.

Another unusual clock is a rolling ball clock. It has a tilted metal plate with a zig-zag course on it. A metal ball runs along the course. When the ball reaches the end of the course, the hands move, the plate reverses its tilt and the ball rolls back to the other side, again reversing the plate’s tilt and moving the hands. Back and forth, back and forth, never stopping. The rolling ball controls the timing of the mechanism and the weight of the ball and length of the course were precisely calculated so that it takes an exact amount of time for the ball to reach the end of the plate. This clock was built in 1865 by the British clock maker who built Big Ben.

He as a picture frame clock. There painting on the glass face of the clock was painted in reverse, on the back of the clock so that you see to picture properly from the front. This clock is a little over 200 years old.

Adams has a few working clock mechanisms on display that lets visitors see the inner workings of a mechanical clock.

There is also a cuckoo clock. It works and you will hear it cuckoo if you stick around.

One curious clock is an electric clock from the 1940s. It looks like a World War II B-17 bomber. When the alarm goes off, it consists of the clock making engine sounds. When it does, the propellers spin and the red and green navigation lights on the wingtips blink.

He has more clocks in his collection and plans to bring one in from the 1700s. This clock has wooden gears, made of black walnut. Adams said colonial clockmakers often made clocks with wooden gears because they had to import brass from Britain and that was expensive. America, however, had lots of wood.

There is a small theater at the back of the museum and people can bring up a video that shows the history of keeping time, from sundials to the present time.

There is a person in the museum who can explain everything. If somebody asks her something that stumps her, she can get Adams.

“I’m just around the corner,” he said.

Adams Clocks/Repairs is on East Main Street next door to the Blue Lady. He repairs antique clocks. Adams said antique clocks go up in value, so they are worth fixing.

He warns against do-it-yourself repairs.

“If you don’t know what you are doing, don’t take it apart,” Adams warns.

Adams has seen, and repaired, some disasters. Sometimes he’s seen clocks that were repaired with solder. Solder is not meant for that sort of thing and quickly gives out. Then Adams has to remove the solder before he can repair the clock. Once he repaired a clock that was brought to him as a bag full of parts. That was an expensive repair because, first he had to figure out how to put it back together before he could repair it.

Adams said it’s possible to buy parts for old clocks. He has machine tools that will allow him to make parts. He can also do cabinet carpentry, so he can repair a damaged cabinet.