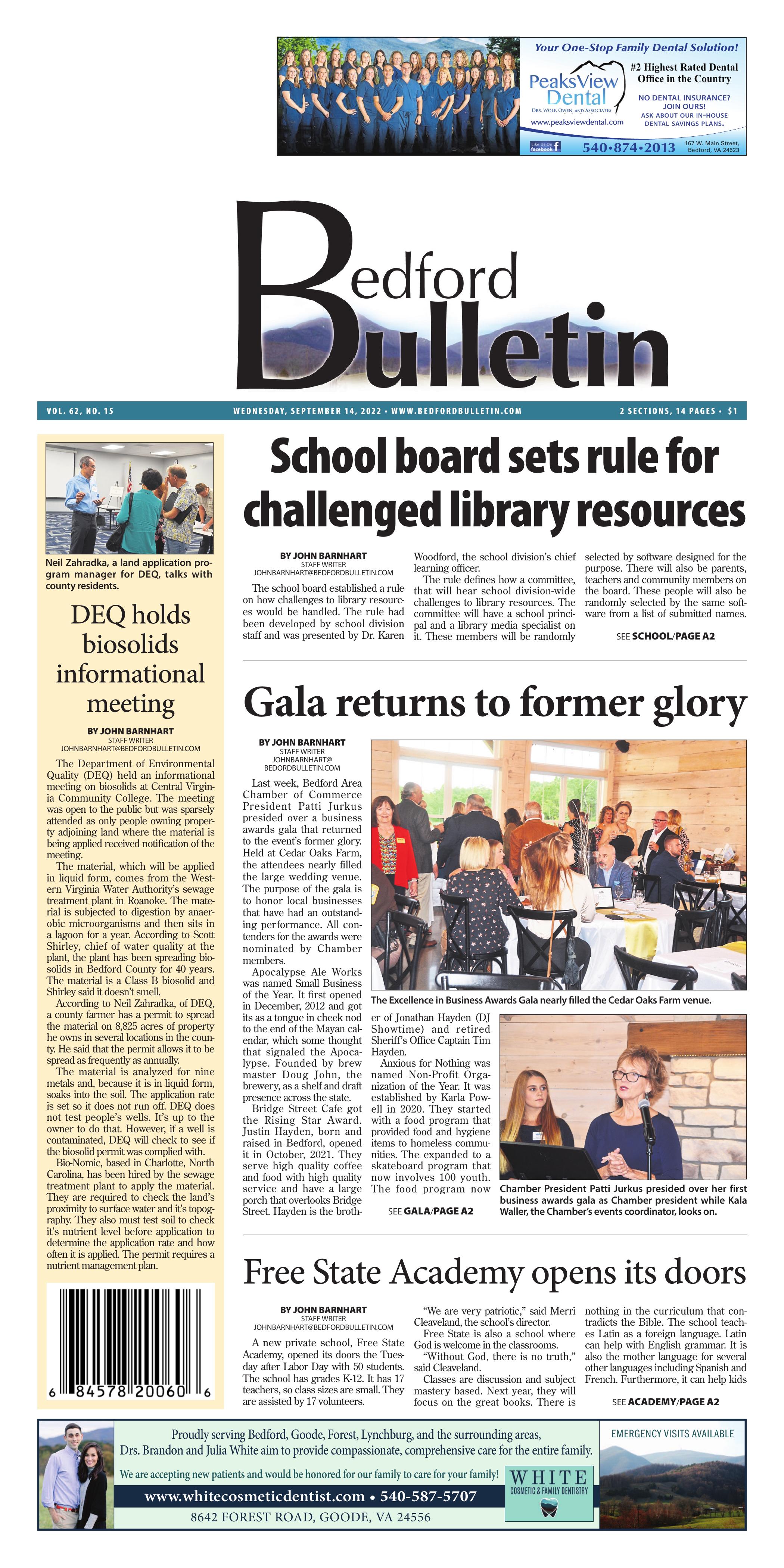 The school board established a rule on how challenges to library resources would be handled. The rule had been developed by school division staff and was presented by Dr. Karen Woodford, the school division’s chief learning officer.

The rule defines how a committee, that will hear school division-wide challenges to library resources. The committee will have a school principal and a library media specialist on it. These members will be randomly selected by software designed for the purpose. There will also be parents, teachers and community members on the board. These people will also be randomly selected by the same software from a list of submitted names. One school board member will also be on the committee, appointed by the school board chairman.

The school board will ultimately make the decision on whether to remove a library resource on a school division wide basis. Dr. Woodford said the thinking behind having a school board member on the committee was that the board would have a member who was present for all the discussion that led up to the committee’s recommendation when it comes before the school board.

There will be public notification only if a challenged library item is brought before a committee to be considered for school division wide elimination.

The school board agreed to have their attorney draft a deed for the sale of Edmund Street Park to the Town of Bedford. The deed will specify that the town will maintain the property as a public park for 25 years. It also specifies that the town will continue to mow the field adjoining the park for the next 25 years.

“Nothing trumps the safety of our children,” said Dr. Mele. “We have to find a way to make it work.”

Last week, Bedford Area Chamber of Commerce President Patti Jurkus presided over a business awards gala that returned to the event’s former glory. Held at Cedar Oaks Farm, the attendees nearly filled the large wedding venue. The purpose of the gala is to honor local businesses that have had an outstanding performance. All contenders for the awards were nominated by Chamber members.

Apocalypse Ale Works was named Small Business of the Year. It first opened in December, 2012 and got its as a tongue in cheek nod to the end of the Mayan calendar, which some thought that signaled the Apocalypse. Founded by brew master Doug John, the brewery, as a shelf and draft presence across the state.

Bridge Street Cafe got the Rising Star Award. Justin Hayden, born and raised in Bedford, opened it in October, 2021. They serve high quality coffee and food with high quality service and have a large porch that overlooks Bridge Street. Hayden is the brother of Jonathan Hayden (DJ Showtime) and retired Sheriff’s Office Captain Tim Hayden.

Anxious for Nothing was named Non-Profit Organization of the Year. It was established by Karla Powell in 2020. They started with a food program that provided food and hygiene items to homeless communities. The expanded to a skateboard program that now involves 100 youth. The food program now offers “breaking bread boxes.” These are meal kits that are delivered bi-weekly, free of charge, that include meal ingredients, a recipe and a family activity. This year they offered a free camp to 57 students.

Little Otter Flower Farm received the Agri-Business of the Year Award. Their mission is to help people with autism develop job skills and integrate into the community. So far, since January 2021, they have helped four interns develop new skills. Their son, Max, who is a sophomore in high school and has autism has taken over record keeping at the farm and handles cash transactions for them at the Bedford Farmers Market.

He also handles planning and communications for their Random Acts of Kindness deliveries.

Sam Moore Furniture was named Large Business of the Year. Founded in 1943, the company currently employs more than 230 people. They have 60 employees who have been with them for 20 years or more and 15 who have worked for them for more than 40 years. The company’s goal is to provide competitive pay rates.

Travis Thomas was named 2022 Citizen of the Year. Thomas has coached basketball since 2010 through recreational leagues and Liberty High School and Middle School. He established a travel basketball program and hosts basketball tournaments and a father and child cornhole event. Thomas is a Bedford Town Police officer.

Thomas would like to see Bedford have a family and youth development center to reach at-risk youth and help young adults break out of the cycle of poverty.

A new private school, Free State Academy, opened its doors the Tuesday after Labor Day with 50 students. The school has grades K-12. It has 17 teachers, so class sizes are small. They are assisted by 17 volunteers.

“We are very patriotic,” said Merri Cleaveland, the school’s director.

Free State is also a school where God is welcome in the classrooms.

“Without God, there is no truth,” said Cleaveland.

Classes are discussion and subject mastery based. Next year, they will focus on the great books. There is nothing in the curriculum that contradicts the Bible. The school teaches Latin as a foreign language. Latin can help with English grammar. It is also the mother language for several other languages including Spanish and French. Furthermore, it can help kids get used to the concept of nouns with cases, a system used by many modern languages, including Greek and the Slavic languages.

Delegate Wendel Walker was there for the ribbon cutting. Walker said he met, last summer, with the people running the school and liked what he heard. He was impressed that the school gives parents another choice. He also believes it is closer to what America’s founders wanted for America.

“I’m looking forward to great things coming from this academy,” he said.

The school costs $300 per month to attend. There are scholarships available for parents who can’t afford that. The school is hosted by Timber Ridge Baptist Church. Phil Kelley, the pastor said he would like to see other churches in the county, that have enough space, to host a Free State Academy.

The Department of Environmental Quality (DEQ) held an informational meeting on biosolids at Central Virginia Community College. The meeting was open to the public but was sparsely attended as only people owning property adjoining land where the material is being applied received notification of the meeting.

The material, which will be applied in liquid form, comes from the Western Virginia Water Authority’s sewage treatment plant in Roanoke. The material is subjected to digestion by anaerobic microorganisms and then sits in a lagoon for a year. According to Scott Shirley, chief of water quality at the plant, the plant has been spreading biosolids in Bedford County for 40 years. The material is a Class B biosolid and Shirley said it doesn’t smell.

According to Neil Zahradka, of DEQ, a county farmer has a permit to spread the material on 8,825 acres of property he owns in several locations in the county. He said that the permit allows it to be spread as frequently as annually.

The material is analyzed for nine metals and, because it is in liquid form, soaks into the soil. The application rate is set so it does not run off. DEQ does not test people’s wells. It’s up to the owner to do that. However, if a well is contaminated, DEQ will check to see if the biosolid permit was complied with.

Bio-Nomic, based in Charlotte, North Carolina, has been hired by the sewage treatment plant to apply the material. They are required to check the land’s proximity to surface water and it’s topography. They also must test soil to check it’s nutrient level before application to determine the application rate and how often it is applied. The permit requires a nutrient management plan.