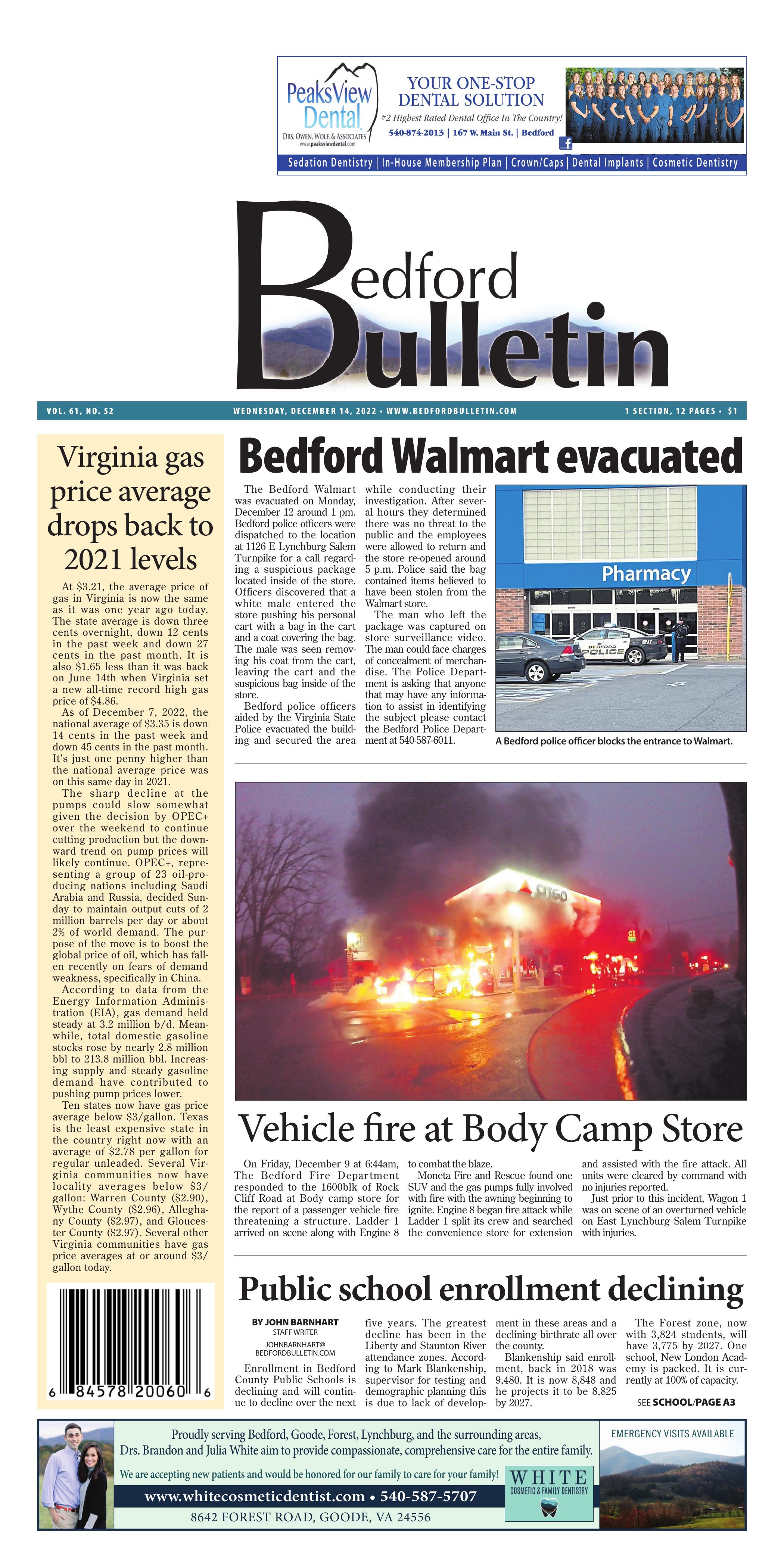 A Bedford police officer blocks the entrance to Walmart.

The Wal Mart was evacuated on Monday afternoon.

The Bedford Walmart was evacuated on Monday, December 12 around 1 pm. Bedford police officers were dispatched to the location at 1126 E Lynchburg Salem Turnpike for a call regarding a suspicious package located inside of the store. Officers discovered that a white male entered the store pushing his personal cart with a bag in the cart and a coat covering the bag. The male was seen removing his coat from the cart, leaving the cart and the suspicious bag inside of the store.

Bedford police officers aided by the Virginia State Police evacuated the building and secured the area while conducting their investigation. After several hours they determined there was no threat to the public and the employees were allowed to return and the store re-opened around 5 p.m. Police said the bag contained items believed to have been stolen from the Walmart store.

The man who left the package was captured on store surveillance video. The man could face charges of concealment of merchandise. The Police Department is asking that anyone that may have any information to assist in identifying the subject please contact the Bedford Police Department at 540-587-6011.

On Friday, December 9 at 6:44am, The Bedford Fire Department responded to the 1600blk of Rock Cliff Road at Body camp store for the report of a passenger vehicle fire threatening a structure. Ladder 1 arrived on scene along with Engine 8 to combat the blaze.

Moneta Fire and Rescue found one SUV and the gas pumps fully involved with fire with the awning beginning to ignite. Engine 8 began fire attack while Ladder 1 split its crew and searched the convenience store for extension and assisted with the fire attack. All units were cleared by command with no injuries reported.

Just prior to this incident, Wagon 1 was on scene of an overturned vehicle on East Lynchburg Salem Turnpike with injuries.

Enrollment in Bedford County Public Schools is declining and will continue to decline over the next five years. The greatest decline has been in the Liberty and Staunton River attendance zones. According to Mark Blankenship, supervisor for testing and demographic planning this is due to lack of development in these areas and a declining birthrate all over the county.

He said for some time the number of kindergarten children coming in each year has been smaller than the number of seniors graduating.

Blankenship’s figures were not adjusted to take growth into account.

“The [supervisors’] plan is to grow Forest,” said Dr. Marc Bergin, superintendent of schools. Dr. Bergin noted that people outside Forest are not looking for growth.

The school board heard a presentation by Regina Bratton on reviving the old Classroom Quiz TV program. This was once aired on WDBJ.

“I’d like to do that again,” Bratton said, who identified herself as a television professional.

Bratton said she would like to shoot a pilot, consisting of several sessions with students from public schools, private schools and home schooled students. They would be competing for college scholarship money. She said the money would come from advertisers.

She said she has approached both WDBJ and WSET with the idea. Bratton said she preferred doing it on WDBJ because that station had done the original.

Bratton asked the school board to provide a staff member to work with her. She also said she would need locations to shoot the pilot episodes.

The school board liked the idea and directed Dr. Bergin to provide a staff member to work with Bratton.

During the citizen comment period, Jack Taylor spoke out against The Satanic Temple’s lease of the Jefferson Forest High School auditorium for a family movie night in February.

“Don’t we teach a scientific atheism already in our science classes?” he asked.

If that’s what The Satanic Temple wants to do, then it’s already here, Taylor argued. He asked the school board to move the movie night off of school property.

At $3.21, the average price of gas in Virginia is now the same as it was one year ago today. The state average is down three cents overnight, down 12 cents in the past week and down 27 cents in the past month. It is also $1.65 less than it was back on June 14th when Virginia set a new all-time record high gas price of $4.86.

The sharp decline at the pumps could slow somewhat given the decision by OPEC+ over the weekend to continue cutting production but the downward trend on pump prices will likely continue. OPEC+, representing a group of 23 oil-producing nations including Saudi Arabia and Russia, decided Sunday to maintain output cuts of 2 million barrels per day or about 2% of world demand. The purpose of the move is to boost the global price of oil, which has fallen recently on fears of demand weakness, specifically in China.