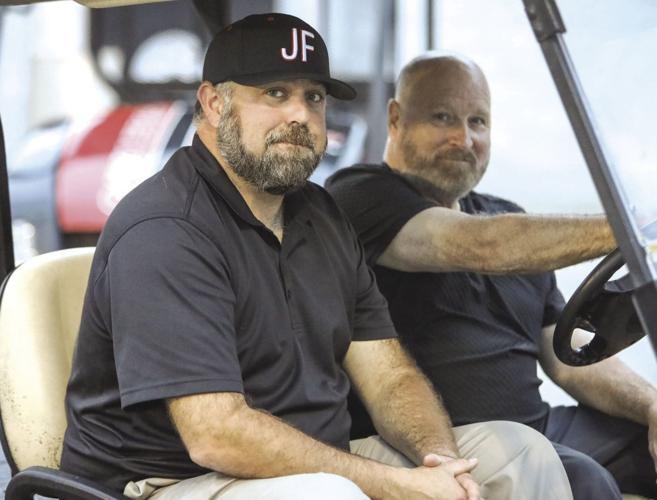 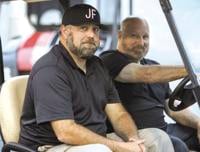 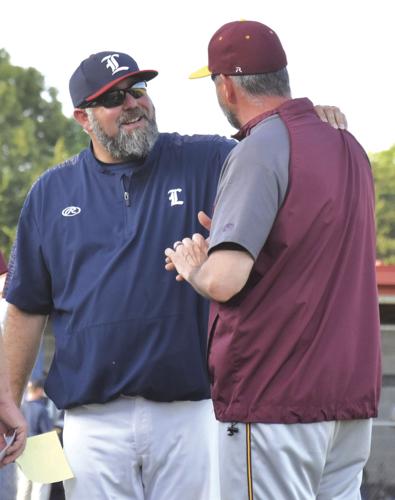 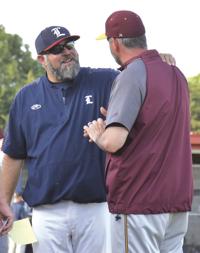 Jeremy Sink, Liberty’s former baseball coach, talks with a coach from Brookville before a game last month. Sink left the Minutemen to become the athletic director at Jefferson Forest. 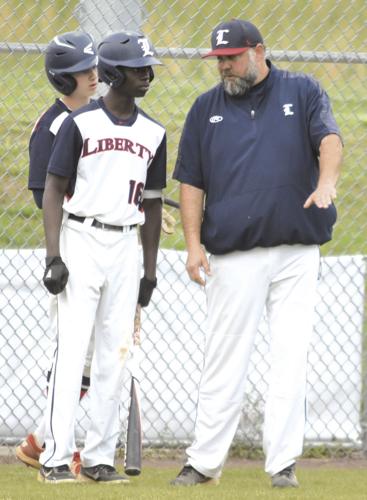 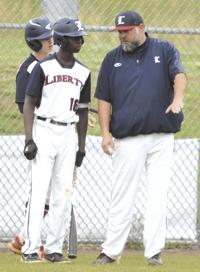 Liberty’s Christian Kittrell gets some advice from coach Jeremy Sink before heading to the plate against Brookville.

Jeremy Sink, Liberty’s former baseball coach, talks with a coach from Brookville before a game last month. Sink left the Minutemen to become the athletic director at Jefferson Forest.

Liberty’s Christian Kittrell gets some advice from coach Jeremy Sink before heading to the plate against Brookville.

Being a veteran baseball coach, Jeremy Sink knows you can’t hit a home run if you don’t swing the bat.

So, when the athletic director job opened up at Jefferson Forest, Sink decided to take a cut at it.

And, like a hanging curveball over the plate, he knocked it out of the park.

On Friday, Sink officially takes the reins from Jedd Zaring as the Cavaliers next AD. The former Liberty High baseball skipper with 19 years of statewide coaching experience was picked from more than 30 candidates to be the boss of JF’s athletic programs.

He admits it’s a “big jump” going from the coach of a Class 3 baseball team to a Class 4 administrator, but he feels like the time was right for him to make the move.

“You wait on something like this and you wonder, ‘If I don’t jump on it now will I ever have the opportunity again,’ ” he said. “This opportunity showed up and I was like, ‘I could pass on it right now and wait three or four years or five years and regret it.’

“My wife and I talked about it and it was something I always aspired to do. … I’ve told a lot of athletes during my time, guys and girls, to chase their dreams. For me, this is one of those times. When opportunity knocks, you have to answer the door.”

The Buchanan native and three-sport star at James River, who just recently turned 40, has had coaching stints at his alma mater, Potomac Falls, Rockbridge County, Cave Spring, E.C. Glass and Liberty. He’s spent the last four years as the Minutemen’s head coach, but because of COVID, he’s only had three seasons. He was also an assistant coach for the varsity girls basketball team.

Although he only spent a relatively short time at Liberty, he said he is going to miss it and praised the administration, teachers and fellow coaches for the support and friendship they showed him over the years.

Some of those haven’t been easy. The last two seasons, wins were few and far between for the Minutemen baseball team. Numbers were dwindling and the impact of the pandemic on the experience levels of the underclassmen was becoming more stark.

But Sink said he never lost his enthusiasm.

“There was a couple times the last year or so, I thought, ‘Maybe (I’m done).’ But then I’d get to the field and get that charge of energy and I’m like, ‘I still have the juice, man,’ ” he said with his trademark big smile. “And I still enjoyed it every day, even in a tough season like this one.”

However, the rigors of coaching began to take a toll on his 40-year-old body.

“I used to be able to throw every day to everybody, multiple rounds,” he said. “Now, I can do it to a certain extent, but my arm is dragging for three or four days after. I never wanted to be that coach that came out to practice so exhausted that I just turned practice over to my assistants while I grab a seat on the bucket. I said when I couldn’t do it with the energy that it requires, then I would step out. I didn’t think of myself as someone who would be in coaching 30, 35-plus years. I never wanted to be that coach who couldn’t do it the way I wanted to do it any more. And I talked to guys who I coached for and they said, ‘You’ll know when you know.’ ”

He said telling his team he was leaving was difficult in many ways.

“The kids were obviously upset and it was hard to tell them. But they handled it well,” he said. “To have that moment with the guys where I had to tell them that I’m not leaving you guys to go coach somewhere else. I’m going to take a job that I feel is going to put my career and my family first.”

His one big regret during his Liberty stint was the 2020 season when COVID shut down spring sports across the state.

“I think about what could have been if we would have had that year,” he said. “I really felt like that group in 2020, we had two guys go on and play college baseball and we could have had four or five play at the next level, was incredible. Incredible players, incredible teammates, incredible families.”

Now he turns his attention to the school about 10 miles up Route 221. A one-time rival that he hopes will be the place where, like Zaring, he will retire from.

For the past month or so, Sink has been shadowing Zaring, trying to learn the details of running a successful athletic department. He’s never been an AD, so he’s doing everything he can to educate himself on the new job. He plans to attend the AD conference in Charlottesville this month and has reached out to his counterparts, past and present, for advice and tips.

He knows there will be a learning curve, but he’s confident he can handle it.

“I’ve seen seven or eight different ADs do this,” he said. “I’ve got to see if from the 1A level to the 5A level and I’ve seen what works for some people and what doesn’t work. … I’ve already been working with Jedd here a lot and seeing how things are done. Plus, I’ve known Ben Martin (JF assistant principal) and Larry Kidd (JF assistant football coach) for years and they have been ADs, so I have them if I have any questions.”

He’s lucky in that Zaring has done an outstanding job in the last five years he’s been AD and that JF has enjoyed a great deal of success before and after the pandemic. Just a few weeks ago, the Cavaliers’ boys soccer team was playing for a state championship, the baseball team qualified for its first state tournament appearance since 2015 and the girls track team finished second in the state meet.

Sink’s goal is to maintain that high level of success and build on it.

“When you have the chance to run a program as successful as Jefferson Forest, who wouldn’t want that job?” he asked. “When people see the JF logo, and it’s just a simple JF in white, outlined in red on a black background, they know. They know where it’s at. It’s like the Green Bay Packers G or the Dallas Cowboys star. When you see the JF logo it speaks for itself. I want to continue the athletic tradition at JF and keeping the train moving. That’s the big thing.

“I’ve moved around enough to know change can be a good thing. There’s different obstacles in every job and there’s different things where you’re going to be challenged. You’re going have challenges and roadblocks and things you have to go through no matter what field you’re in.

“I don’t know everything about being an athletic director right off the surface, but I’m going to learn. I’m going to do my best to communicate and treat coaches and people the same way I want to be treated.”

Another aspect of that job that made it attractive to Sink is more personal. In addition to it being just five minutes from his home, it gives him the chance to spend more time with his family.

“This gives me the flexibility to be with my family more,” he said. “My daughter is now 7, my son is 3. Now, in the mornings, I’ll be able to take them to school. That’s something I haven’t been able to do. And knowing a few years down the road that when they get to be freshmen in high school I get to be with them those four years. Those developmental years when things are changing. The driving and going after colleges and graduation. I’m going to get to be there through all of that. That part (of this job) was huge.”