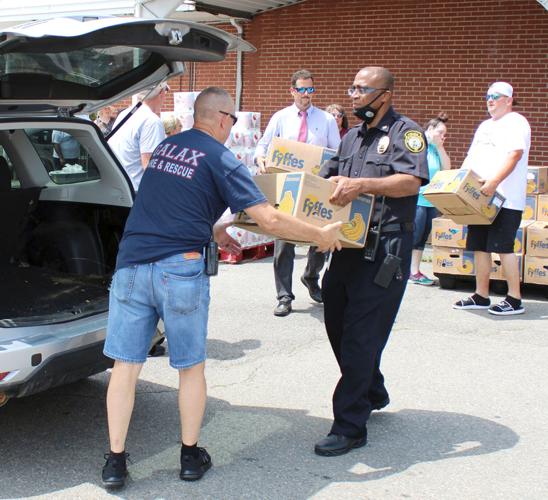 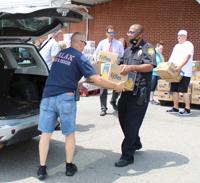 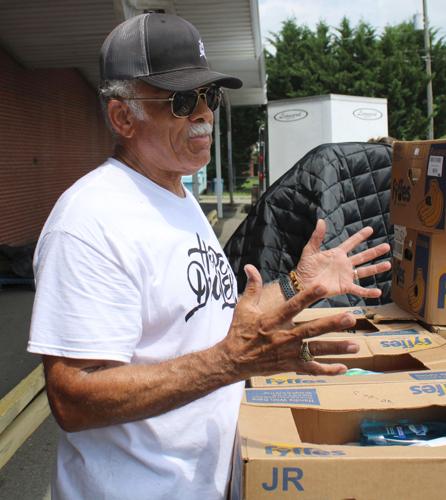 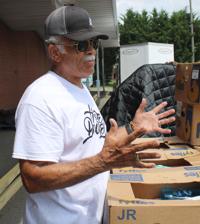 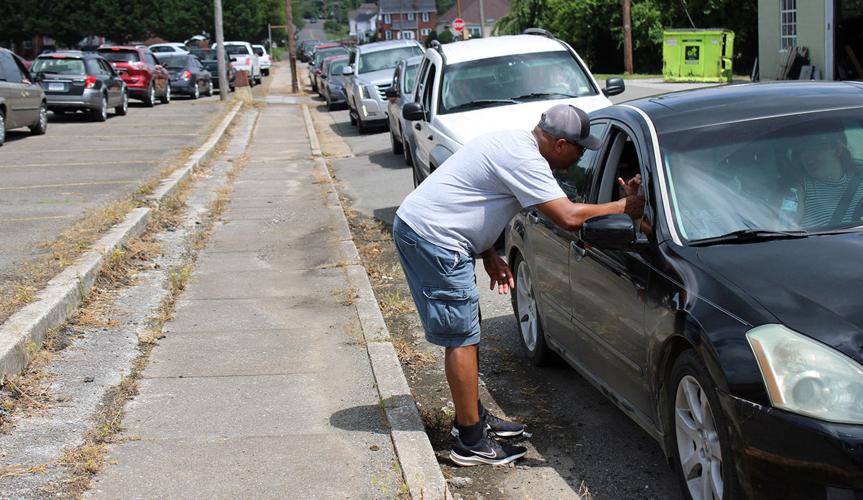 Volunteer Chauncey Robinson stops to check in with a driver as he directs the food distribution line’s traffic. 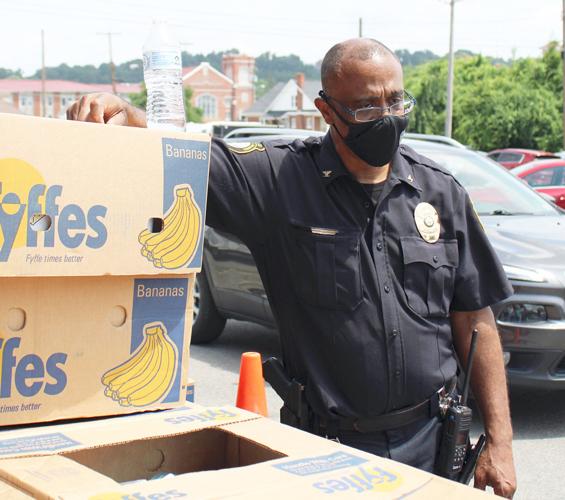 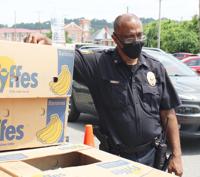 Police Chief DeWitt Cooper pauses handing out boxes of food and supplies while new cars drive up in the distribution line. 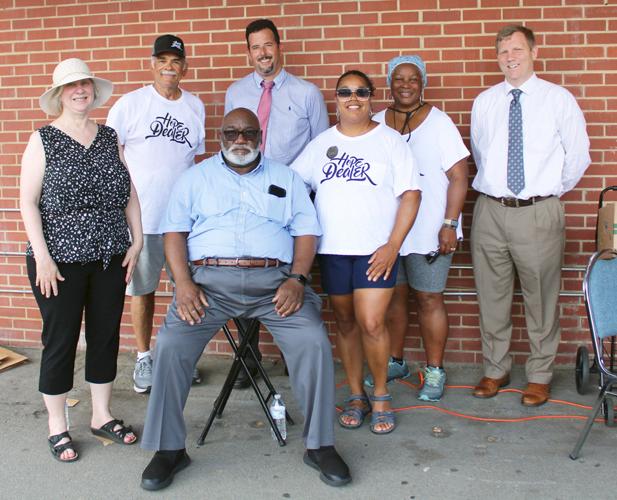 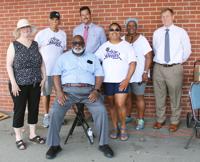 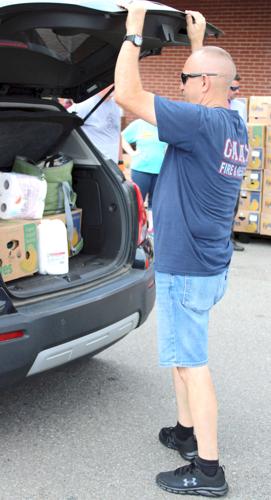 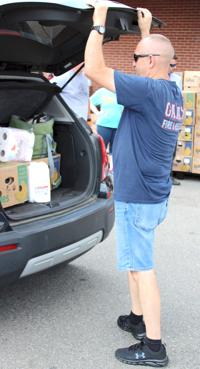 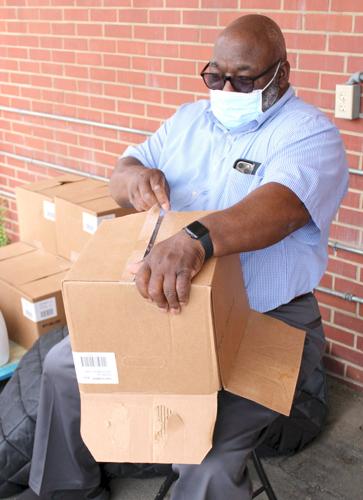 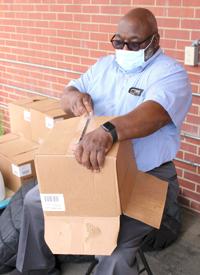 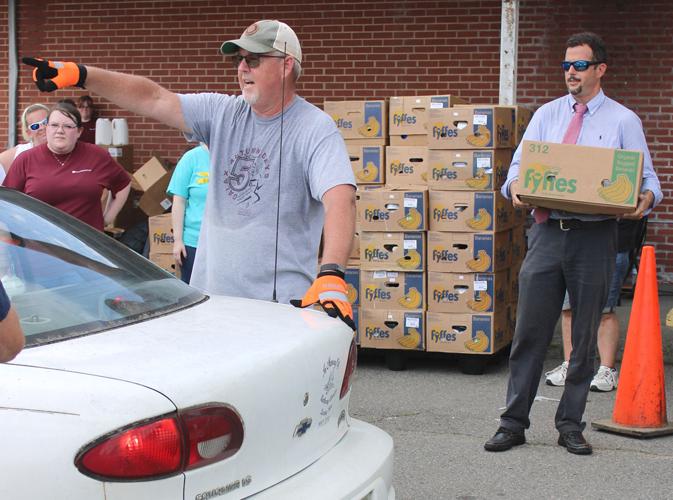 Volunteer Chauncey Robinson stops to check in with a driver as he directs the food distribution line’s traffic.

Police Chief DeWitt Cooper pauses handing out boxes of food and supplies while new cars drive up in the distribution line.

Cars wound around the parking lot and down the street from the new God’s Storehouse & Soup Kitchen headquarters in Galax last Wednesday, as families and individuals — some from as far away as Whitetop and Mouth of Wilson — waited to pick up boxes of food, milk and supplies like toilet paper.

It was, however, the last of the box distributions for the foreseeable future, as the Storehouse’s COVID-related Department of Housing and Community Development (DHCD) grant money has run out.

The funds helped over 2,000 people for the last eight months. Formerly, God’s Storehouse used the DHCD grant money to partner with local restaurants and catering companies for food.

No new funds have been secured to replace them, though the city’s new cGrant Administrator Jolena Young and God’s Storehouse Director Kisha Johnson are looking. The Storehouse is also working with regional food bank Feeding Southwest Virginia.

According to Johnson, some people came as early as 5 a.m. to line up for the food box distribution, which didn’t start until late morning. Despite the grim circumstances, volunteers and beneficiaries alike were in high spirits, laughing and bantering as the line moved along on June 15.

The Storehouse’s new headquarters are located at the former Oldtown Market, but it has not been renovated to include a kitchen yet. God’s Storehouse is still using the kitchens located in the basement at Rooftop of Virginia, just a couple of blocks away, where the non-profit started out.

While the Appalachian Regional Commission is assisting financially with the Oldtown Market renovations, which are going forward, the food is still a question of immediate funding — and donations.

“They’re going to start doing regular food boxes like they used to do before the COVID grant, the first Wednesday of every month, starting in July,” said former city manager and God’s Storehouse Board Member Keith Barker. Johnson confirmed it, and said that Blue Ridge Fellowship church is going to help with milk or eggs.

While U.S. Sen. Mark Warner (D-VA) had been invited to witness the final distribution, he was unable to attend. However, he sent his regional office director, Shane Clem, to observe. Clem ended up rolling up his sleeves and pitching in to help tote boxes to cars.

Warner later issued a statement about the non-profit’s situation, saying, in part, “Food banks like God’s Storehouse work day-in and day-out to make sure that families don’t go hungry, which is why I’ve made it my mission in the Senate to support these efforts both at the individual level and on a grand scale through federal legislation.”

“The need is just so huge,” Johnson said later. “The majority of people we serve are elderly and disabled. We had 225 boxes to give away, but they were gone [quickly]. If we’d had 300, we’d still have needed more.”

She continued, “We need help with milk and eggs and orange juice at the very least. We have foods that we get from Feeding America, but they are nothing like the boxes we’ve been doing the past year.”

Along with food boxes — which they plan to give out the first Wednesday of every month, instead of the first and third as before — God’s Storehouse is seeking people to cook and serve hot meals three days a week from the Rooftop basement kitchens, as well as donations of the food itself for that part of its ministry.

Johnson said there is a particular need for shelf-stable, single-serving pop-top foods that are easy for children, disabled people or the elderly to open.

“We’re blessed to be a blessing,” Johnson said, describing the non-profit’s mission. “If we have enough money to feed our neighbor, shouldn’t we?”