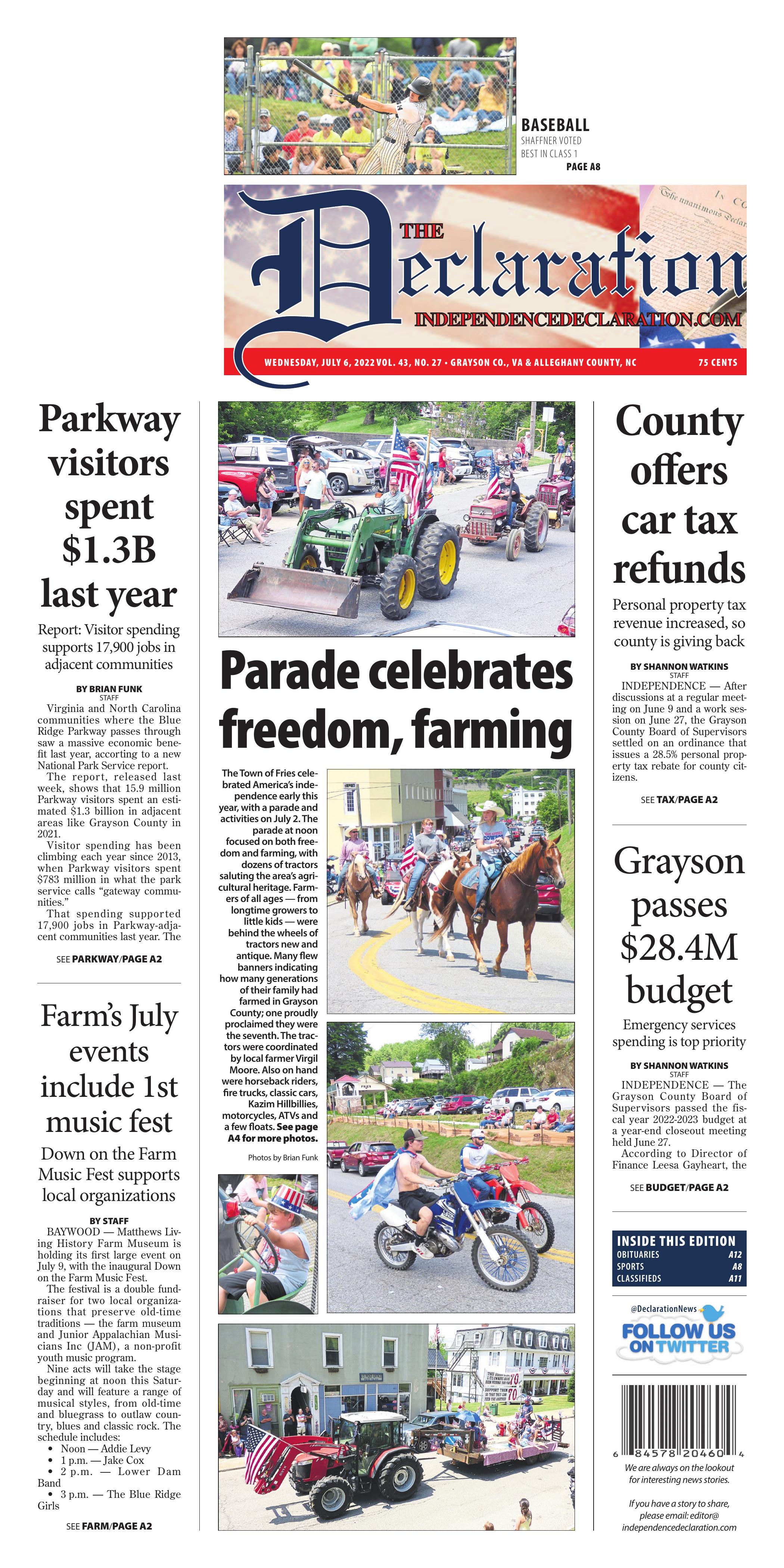 The Town of Fries celebrated America’s independence early this year, with a parade and activities on July 2. The parade at noon focused on both freedom and farming, with dozens of tractors saluting the area’s agricultural heritage. Farmers of all ages — from longtime growers to little kids — were behind the wheels of tractors new and antique. Many flew banners indicating how many generations of their family had farmed in Grayson County; one proudly proclaimed they were the seventh. The tractors were coordinated by local farmer Virgil Moore. Also on hand were horseback riders, fire trucks, classic cars, Kazim Hillbillies, motorcycles, ATVs and a few floats.

INDEPENDENCE — After discussions at a regular meeting on June 9 and a work session on June 27, the Grayson County Board of Supervisors settled on an ordinance that issues a 28.5% personal property tax rebate for county citizens.

The measure cannot be made official by vote until the board’s July meeting, as the state law that allows for localities to offer the rebate only went into effect July 1.

“This is just a one-time deal because of the used car values going up instead of down like they always did,” said Grayson Commissioner of Revenue Larry Bolt. “We did not change the rate of $2.25 [per $100 of assessed value], but the values went up, so the board of supervisors decided to do a one-time credit.”

Supply chain issues caused by the pandemic assured fewer new vehicles were made and sold, which made existing vehicles, even older and used ones, go up in value instead of depreciating as they normally would — a first in American economic history. Because of this, some citizens saw their personal property taxes rise sharply and even double.

“When we looked at all vehicles that qualified, and we had X amount of money as surplus,” the county decided to refund taxpayers 28.5%, said Bolt.

He noted that the actual amount was 29%, but the county needed to use the half-% to pay for system changes to handle the rebate, “part of which is paying our software company, because they had to design a whole new procedure to do this.”

The old due date for personal property tax was June 5; the new one is Sept. 2, which was originally set just to let people take more time to pay the increased rates. Now, citizens who have not yet paid will get a new bill showing the reduced amount, along with the amount taken off their bill by the ordinance.

Those who already have paid will receive a letter detailing the amount they will receive back, which will arrive later in the year.

County Treasurer Pete Hall said that citizens who already paid should expect a refund check. It was not likely that there would be an option to leave the refund on their account as a credit against future personal property taxes.

“I expect we’ll send a check to everyone,” said Hall. “If you start having to pick and choose, that may be pretty difficult to do. This is gonna be a bit of an undertaking.”

The Blue Ridge Parkway is shown.

Visitor spending has been climbing each year since 2013, when Parkway visitors spent $783 million in what the park service calls “gateway communities.”

That spending supported 17,900 jobs in Parkway-adjacent communities last year. The report shows that more than 5,000 additional tourism-related jobs in gateway communities have been added since 2012.

She didn’t have numbers about specifically Parkway-related spending or visitation in Grayson last year, but Cornett did cite one telling example. “Two of our most successful vacation rentals are on the Parkway in the Fairview area,” she said, based on the amounts of transient occupancy tax submissions to the county.

This reflects a national trend, as the National Park Service reported that the lodging sector had the highest direct effects from visitation, both along the Parkway and nationwide. Last year, Parkway visitors spent a total of $560 million on hotels, motels, cabins, bed-and-breafasts and other lodging in adjacent communities. That doesn’t include an additional $37 million in revenue from camping.

Cornett said having the Parkway pass through Grayson creates unique opportunities to market the county.

“Grayson County advertises in the Blue Ridge Parkway Association’s map because the Parkway is visited most by tourists from across the nation, and we want to encourage tourists to leave the Parkway for a visit to view our beautiful vistas,” she said, adding that many travelers straying off the Parkway to visit the county “stop by the visitor center on their way to Grayson Highlands to inquire about the ponies.”

Originating as a public works project of the 1930s, the Parkway’s designed landscape was always intended to bring economic stimulation to its surrounding communities. Today, outdoor recreation opportunities from hiking trails to scenic drives, combined with the varied experiences found in gateway communities in North Carolina and Virginia, continues to attract millions of visitors each year.

“For generations, the Parkway has attracted millions of visitors who enjoy both the natural beauty and cultural heritage of our region, while contributing positively to the economy in our surrounding communities,” said Parkway Superintendent Tracy Swartout. “As our country moves through the varied impacts resulting from the pandemic, we are grateful that the Parkway continues to serve as a touchstone, reconnecting people with inspiring places of deep significance, while also supporting economic resiliency and vitality for local communities moving forward.”

The peer-reviewed visitor spending analysis was conducted by economists at the National Park Service and the U.S. Geological Survey.

The report shows that more than 297 million total national park visitors spent $20.5 billion in communities within 60 miles of a national park last year. This spending supported 322,600 jobs nationally; 269,900 of those jobs are found in gateway communities like Grayson County. The cumulative benefit to the U.S. economy was $42.5 billion.

The National Park Service has an interactive tool that enables users to explore visitor spending, jobs, labor income and more for national, state and local economies. Users can also view year-by-year trend data. The interactive tool and report are available at nps.gov/subjects/socialscience/vse.htm/.

To learn more about all the national park sites in Virginia, go to nps.gov/state/va/index.htm/.

INDEPENDENCE — The Grayson County Board of Supervisors passed the fiscal year 2022-2023 budget at a year-end closeout meeting held June 27.

According to Director of Finance Leesa Gayheart, the final general fund amount was $28.4 million.

The main takeaway in the budget, according to County Administrator Bill Shepley, is that “this year, our number one priority is to upgrade and stabilize our emergency services so they can deliver the best service possible. We want to make sure they have everything we can afford to give them so they can serve the people.”

Allocations are $2.9 million for the Grayson County Sheriff’s Office and $1.5 million for fire and rescue services, for a total of more than $4.3 million.

Shepley noted that the funding for the sheriff’s office would help add another deputy in the coming year, and another would be added each year “in a phased approach over the next 2-3 years.”

BAYWOOD — Matthews Living History Farm Museum is holding its first large event on July 9, with the inaugural Down on the Farm Music Fest.

Nine acts will take the stage beginning at noon this Saturday and will feature a range of musical styles, from old-time and bluegrass to outlaw country, blues and classic rock. The schedule includes:

Down on the Farm Music Fest will be held rain or shine on the grounds of the Matthews Farm on White Pine Road, west of Galax.

Activities for kids are also included, as well as museum exhibits, craft vendors and the sale of food and libations. Entry is $20 per adult at the gate, with children age 15 and younger free with adult. Attendees should bring a chair or blanket to sit on.

Junior Appalachian Musicians Inc. is the parent organization for more than 50 afterschool traditional music education “JAM” programs in Southwest Virginia, North Carolina, South Carolina and Tennessee. For more information about JAM and for the official schedule of events on July 9, visit jamkids.org.

There’s even more going on at the farm museum this July.

On July 23, Matthews Farm will have another Demonstration Saturday event, with talented volunteers showing off their traditional skills from 10 a.m.-3 p.m.

On July 29, Mount Joy Naturals will teach a Homestead class about CBD and the differences in Delta 8, and will provide information about growing in Virginia. There is a cost to this class, so contact the museum for more information.

Music jams and potlucks are every Tuesday starting at 6 p.m.

Storytime and games are held every Wednesday from 11 a.m.-noon.